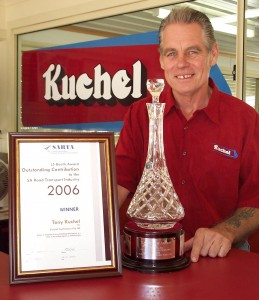 Maxwell Kuchel began his career as a truck driver in 1945 at the age of 18 in SA’s Riverland.  He moved to the Barossa Valley in 1951 sharing a school bus contract with a cousin, and finding work for his trucks in-between school bus hours.  Over the years he worked for the Highways, ICI (now PQM) in Penrice, and Adelaide Brighton Cement.  In 1973, son Tony joined him in the business.  Max was a hardworking, honest individual and took great pride in the growing business of Kuchel Contractors.  He was known as a fair and honest individual and was well respected by his peers, right up until his passing in 2004.

Tony Kuchel began his career in mid 1973, Joining his late father Max in the family tipper business. The business grew over the years and became ‘Kuchel Contractors’ which operates in the Barossa Valley and throughout most of SA and the Eastern Seaboard. Tony has always taken great pride in the presentation of the fleet and is responsible for some of the custom paintings over the years, and the additional business of ‘Kuchel Custom Trucks’. Tony has always been a very passionate advocate for the road transport sector, working to raise awareness about transport and supporting the local community. 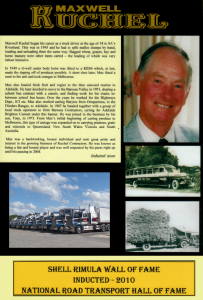 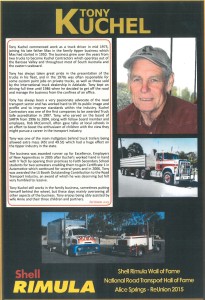